So you need a new workhorse for mobile music production, and you’ve decided to look beyond Apple’s Mac OS. While the Surface Book 3 pulses with more power, the Surface Go 2 can deliver surprisingly music-friendly stability at a more affordable price. Which would make an awesome DAW rig?

A surface for every occasion

Microsoft’s laptop game has become an attractive line of touchscreen hybrids. By the time the Surface Book arrived, the Surface Pro had already solved most of the problems in the combined touch/keyboard/trackpad workflow. I’ve been a Surface Pro user since version 3 (now on version 7) and can tell you that the ease of use and smooth transition between input protocols is superb. With any other laptop or MacBook, I find myself confined to a chair and pushed into a peculiar way of working. With a Surface, you can circle it, walk in and out, walk past it with a coffee and type something, sit down and type, stand up and flick a finger. Ordinary laptops drive me crazy.

Besides the Surface Pro, we now have the Surface Laptop, Surface Pro X, Surface Studio, Surface Hub, and future Surface Duo and Surface Neo. But this article focuses on the last two models that define the top and bottom of the range – the flagship Surface Book 3 and the entry-level Surface Go 2. 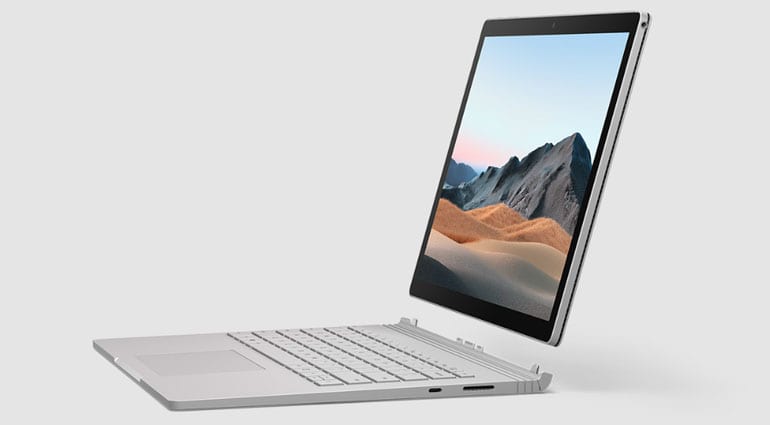 It’s an amazingly designed laptop that looks and feels good and has a respectable amount of power for all your computing needs combined with ridiculously long battery life. But is it really good for music production?

I got my hands on the original Surface Go when it arrived in the UK last year and it’s a fabulous little machine. Version 2 transforms the processor into an 8th generation Intel Gold 4425Y or M3 processor. and increases the screen size slightly to accommodate a more common 1920 x 1280 resolution and aspect ratio. Otherwise, the choices of 4 or 8 GB of memory and 64 or 128 GB of storage remain the same. Prices start at £399. 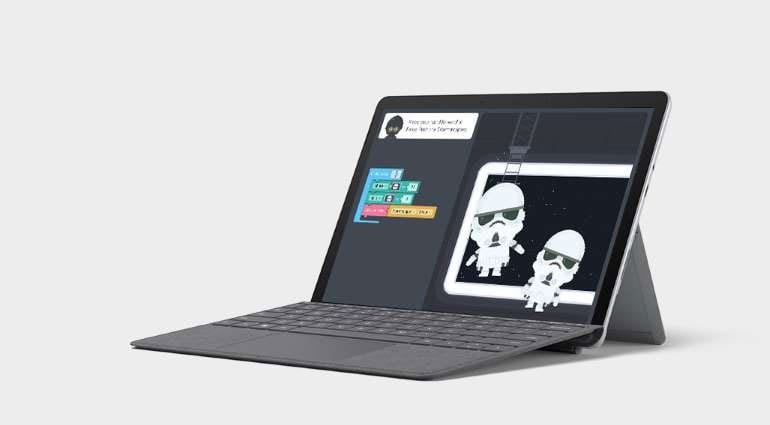 Can you run any music software on such a small device?

Yes, this is where assumptions and reality struggle to reconcile. The assumption is that if you have a decent processor, you’ll be able to run loads of plug-ins and instruments and have a great time making music. The reality is that laptops aren’t designed for audio production. It’s certainly true that processor speed is your friend in terms of the number of plug-ins and complex software instruments, but that power doesn’t determine a given laptop’s ability to successfully run music software at low latencies and playable.

Now don’t get me wrong. Buy a powerful laptop and you might be able to run Ableton Live, Pro Tools, Studio One, and more. no problem. What I’m saying is that processor power is not a guarantee of a trouble-free music creation experience. The problem comes from the functioning of the processors. Mobile processors are designed to save power as much and as often as possible. They slow down as soon as they can and only go back up when the load increases. This synchronization or SpeedStepping can wreak havoc with real-time audio playback. This can cause bursts of audio glitches or sudden drops in power when a temperature threshold is reached and your plug-in heavy project crashes.

There are ways around these issues that are related to High performance power profiles and disabling the turbo mode. But what worries me about the Surface Book 3 is that its base processor speed is only 1.3GHz. It can boost up to an extraordinary 3.9 GHz, which is great for any computing task that doesn’t rely on low-latency real-time audio. But for audio applications, that means there’s 2.6 GHz of floating power that can’t be reliably pinned down to the task of running your DAW. If you turn off turbo mode to get a reliable and stable processor, you end up with a very expensive Quad Core laptop running at 1.3 GHz.

I would like to be. I must point out that I have not tested the Surface Book 3 and so I’m only talking about my experience with the Surface platform and other laptops so far. I’ve been testing Surface Pro generations for music production since version 3. I’ve also reviewed the original Surface Book and Surface Go. Each time it’s slightly different, but I’ve always found the right settings to get decent performance out of it for music production. It almost always means disable turbo mode. This wasn’t a major issue when the stock speed was 2.6GHz, so you only lost a few GHz for stability. What will happen with the Surface Book 3 isn’t clear until someone tests it with music software – you won’t know until you try, because no amount of benchmarks or no computer reviewers will tell you anything about trouble-free low-latency audio performance. .

For example, I reviewed Asus Zenbook Pro Duo UX581GV Laptop for Sound On Sound magazine recently. It has extraordinary desktop-level processing power. It wouldn’t play a single virtual instrument without issues in the audio until I disabled turbo mode. By comparison, when I reviewed the original Surface Go with its paltry 1.6GHz processor, it ran a decent number of virtual instruments and plug-ins right out of the box and you could keep playing it. charge until it maxes out whereas with more powerful Surfaces you rarely get above 70% CPU before the problem starts.

Here is an excerpt from the Zenbook bug. The problem was exacerbated by simultaneous use of the touchscreen, but it crashed on its own.

In the meantime, here’s my take on the original Surface Go from last year:

We are at a critical moment. The method by which I was disabling turbo mode in Surface products was overwritten by Windows 10 May 2020 (2004) Update. They don’t really like you bothering with power profiles. I’m reliably told there’s another way to do it, but none of my Surface Pros have updated to the new version yet, so I can’t test it. Hopefully we can turn this new Windows 10 update into something useful. I also hope we can find stability in the Surface Book 3, because in all other respects it’s an awesome laptop. But we won’t know until I get a chance to try it.

New Jersey, United States, – Market Research Intellect has been analyzing the music production software technology and markets since 2018. Since then, through the analysis of company research, we have been very close to the latest market research and development. In addition, Market Research Intellect works closely with many clients to help them better understand […]

Summary of the role:The Director, Film Music Creative is a key member of the Film Music Department’s Creative Executive Group. This autodidact is responsible for a variety of ongoing routines related to the film / project. Specifically, this role will oversee and manage all musical needs for Back Lot Music soundtracks and third party soundtracks. […]

All kinds of companies have offered their apps for free or offered extensive free trials so everyone stuck inside during the coronavirus pandemic can learn new skills or be inspired. Roland – creators of iconic synthesizers and guitar effects – is the latest to join us. The company’s Zenbeats is a cross-platform digital audio workstation, […]