Spotify has become the first music streaming service to join the metaverse, launching a new virtual island on the Roblox platform.

More young people are spending more time in virtual worlds, such as Minecraft and Roblox, where they interact rather than passively watch or listen.

Roblox is a platform for developers to create games that act as individual worlds for the more than 44 million daily active users. However, it has been criticized for not doing enough to protect its young users.

Almost half are under the age of 13 and studies have shown that there are worlds with parties featuring naked strippers and avatars having simulated sex.

They are also able to communicate through chat boxes, leaving children as young as nine exposed to inappropriate content, although Spotify’s content is supposed to be well moderated and vetted.

When users log into the island, available through the Roblox website or app, they’ll see a central continent surrounded by a collection of islands – each with a theme.

There is also a “Music Playbox” with a soundtrack powered by Spotify’s audio creation tool, Soundtrap, which can be played, paused and skipped by users.

The first themed island to launch will be K-town, dedicated to the world of K-Pop, which will go live later this spring and feature a meet and greet with Stray Kids and SUNMI.

Spotify has become the first music streaming service to join the metaverse, launching a new virtual island on the Roblox platform 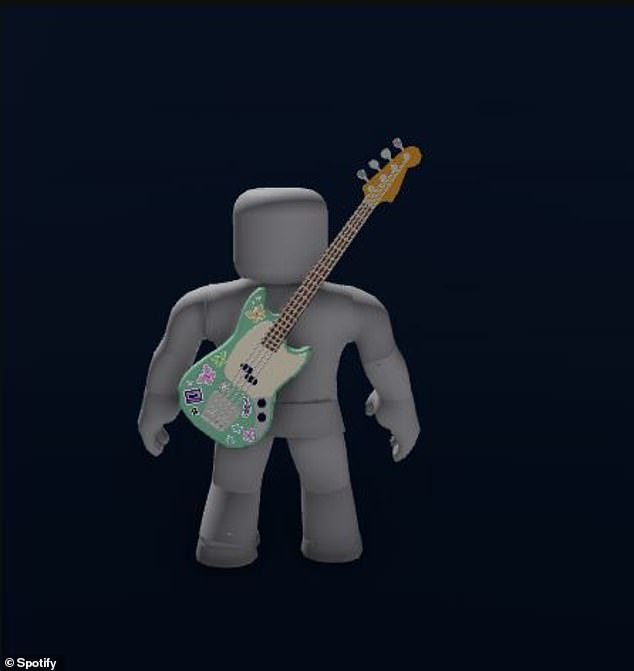 Launched in 2006, Roblox is a platform rather than a game, allowing individuals to create their own worlds or join others – including some high-level games.

Although Spotify is the number one music streaming service on Roblox, it’s not the first brand to embrace the platform and its young audience – with 67% of users under the age of 16.

However, according to a report in the Motley Fool, 23.8 million of Roblox’s 47.3 million daily assets are over the age of 13 and the population is aging.

So far, some major clothing brands have joined Roblox in hopes of building a new allegiance, including Nike, Forever 21, Ralph Lauren, and Vans.

Having music isn’t new to Roblox either, as Lil Nas X and Twenty One Pilots have played concerts in the virtual world, but Spotify is the first to have its own world.

The Lil Nas X concert has been viewed 33 million times, created through a motion capture incarnation of the musician as he performed in the real world. 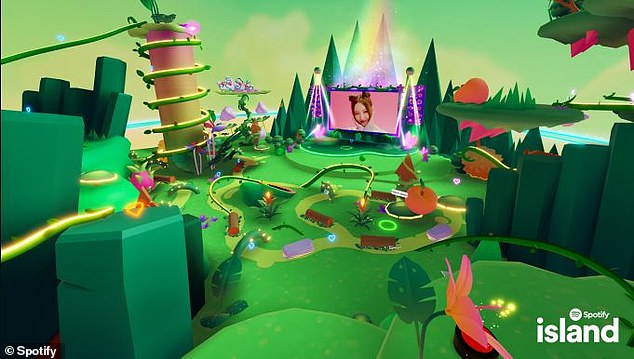 More young people are spending more time in virtual worlds, such as Minecraft and Roblox, where they interact rather than passively watch or listen 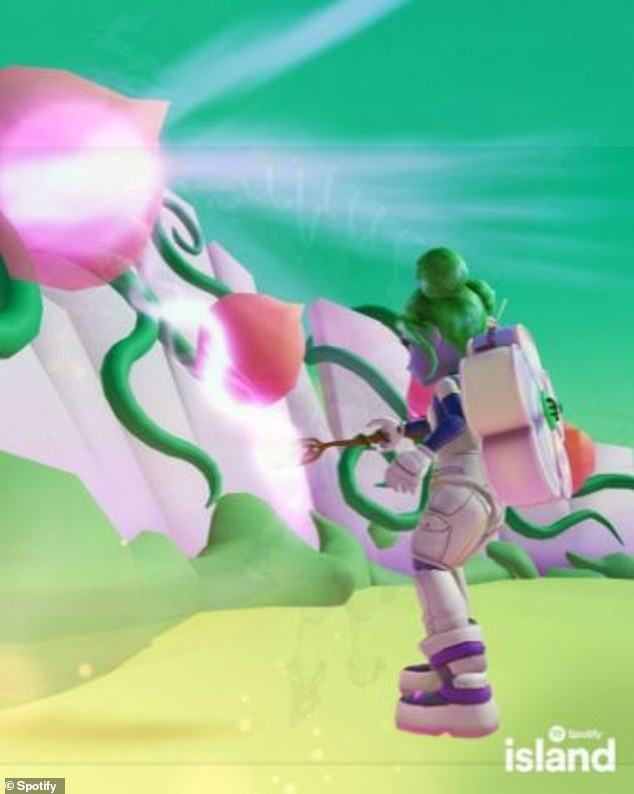 Launched in 2006, Roblox is a platform rather than a game, allowing individuals to create their own worlds or join others – including some high-level games.

Spotify describes it as a “sound paradise where fans and artists from around the world can come together and explore a wonderland of sounds, quests and merchandising”.

“Through this interactive world, we are creating a place where fans can connect and create new sounds together, hang out in digital spaces and access exclusive virtual merchandise. Spotify Island is an audio oasis that has it all. .’

What is the Metaverse?

The “metaverse” is a collection of virtual spaces where you can play, work, and communicate with others who are not in the same physical space as you.

Facebook explained, “You will be able to hang out with friends, work, play, learn, shop, create and more.

While Facebook is leading the charge with the metaverse, it explained that it’s not a one-size-fits-all product that one company can build on its own.

“And it won’t be built overnight. Many of these products will only be fully realized in the next 10 to 15 years.

The suggestion, from the description, is that Spotify will host live artist events within its Roblox island, including meet and greets with musicians.

“Players can also enjoy an immersive audio experience as they create music and explore sounds on virtual beat-making stations powered by Soundtrap,” Spotify said in a statement about the new Roblox collaboration.

Sountrap is a virtual music studio, allowing users of multiple devices to record, edit and produce songs without being in the same room.

“The island will have other musical Easter eggs around every turn for eagle-eyed users to discover. Users can even climb to the top of ‘The Charts’ by collecting points,” Spotify continued.

The world has been designed around shades of the Spotify logo, and there will be heart-shaped icons that users can collect and redeem for digital goods.

To access the themed side islands, which will be activated throughout the year, users must start from the mainland and then walk through the portal.

Each of these islands will include dedicated artist interactions, as well as mini-quests and exclusive content.

The first themed experience fans can look forward to on Spotify Island is K-Park, a tribute to all things K-Pop, which will launch later this spring with an interactive get-together involving Stray Kids and SUNMI.

“Through Spotify Island, we are creating an easy opportunity for artists to connect with fans and partner with Spotify for the creation of virtual in-game merchandise,” a spokesperson said. 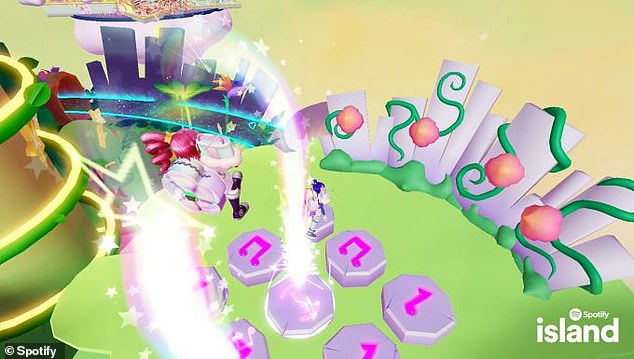 Spotify describes it as a “sound paradise where fans and artists everywhere can go out and explore a wonderland of sounds, quests and merchandising”. 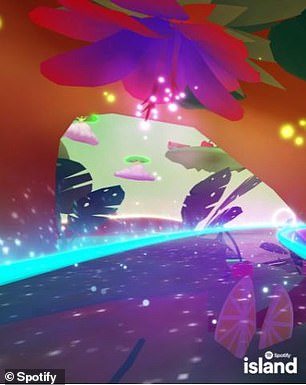 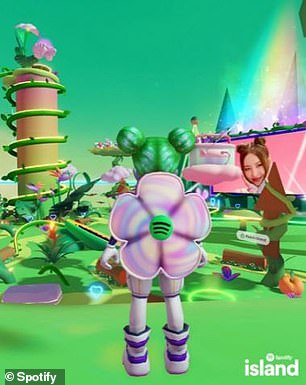 The suggestion, from the description, is that Spotify will host live artist events on its Roblox island, including meet and greets with musicians.

“Spotify’s share of these sales will go directly to the artists themselves. We will be working with artists to create more opportunities like this in the coming months.

“Spotify immerses users in a world of audio no matter how or where they listen. Now, with Spotify Island on Roblox, we’re bringing unique new experiences to fans and artists.

One of the island’s visions is to transform Roblox players into the next generation of creators, including via on-island sound production apps and beat-making stations – as well as using a “stage” with cannons and bubbles.

“The scene isn’t the typical artist released for the fan experience. We’re flipping the script and empowering players to be the creators and truly feel like they’re the artist who plays,” Abby Stewart, director of business development at Spotify, told TechCrunch.

On the surface, the field of music streaming is full of services that allow you to perform similar basic functions. You launch an app, hit play, then enjoy the music. Simple, right? However, a close analysis reveals that there are many music streaming apps that offer great features that make selecting a service a little […]

New Tidal customers can get a good deal over three months of service to see if Hi-Fi audio is all it’s supposed to be. Tidal’s HiFi tier gives access to over 80 million songs with audio quality up to 1411 kbps and costs just $ 1 for your first three months. If you’re looking for […]

Discerning artists and individual music lovers are now taking advantage of music streaming platforms to access content provided by the respective service providers for their listening pleasure. According to the new research report titled “Music Streaming Market – Global Analysis and Forecast to 2027”, the global music streaming market is expected to reach $46.99 billion […]