It’s now official – Proton vehicles equipped with the Atlas operating system will soon have access to the integrated Spotify app. ACO Tech, developer of Atlas (for ACO Tech Local Automotive Services), announced a new partnership with Spotify, which will allow those who have the operating system to use the popular music streaming service natively via the head unit of the car.

For now, the Executive, Premium and Active variants of the 2022 Proton Persona and Iriz are already running Atlas, with the X50 due to be upgraded to the brand new OS via an over-the-air update soon. However, we do not know when each model will receive its OTA update, and the version may differ between models.

Spotify will soon be preloaded in new vehicles, while existing users will soon be able to download the app through the A store. It’s like Google Play and the App Store, but for the Atlas ecosystem. 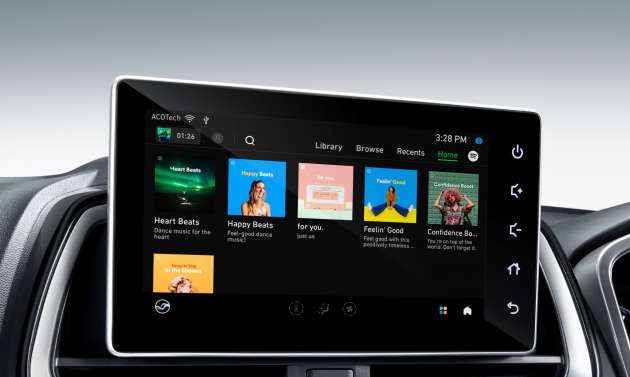 Free and Premium account users will be able to use the native Spotify app on the Atlas head unit. Streaming from your phone to the car via Spotify Connect is also supported. The world’s most popular audio streaming subscription service – with 422 million monthly active users and 182 million Premium subscribers in Q1 2022, according to Statista – Spotify provides access to over 82 million audio tracks and four million podcast titles.

This latest update is certainly good news for Proton users, as it shows that ACO Tech is indeed listening to customer feedback. In short, the original GKUI operating system had Unlimited Music as the default music streaming app, which was later replaced by Joox in mid-2020. The addition of Spotify is certainly more in line with what its customers want.

So, Waze or Google Map next, please ACO Tech? Or better yet, Apple CarPlay and Android Auto also support while you’re at it, thank you very much!

Spotify Wrapped 2021: How To See Your Personal Music Streaming Trends For The Year

It’s that time of year again – Spotify released its Wrapped Experience for 2021, which walks users through a personalized story about their listening habits for the year. This includes your favorite songs, top artists, and the most binged song. You can then share these personalized cards on social media and listen to a curated […]

Deezer goes public via a SPAC deal valuing the music streaming service at 1.05 billion euros, or about $1.1 billion. Why is this important: Deezer owns just 2% of the global music streaming business and is not profitable, but the hope is that this SPAC deal will drive the company’s growth and generate profits. Details: […]